I’m not an avid consumer, because I dare not cheat on my beloved wine and vodka too often.
There are a number of ways in which beer makes me more awesome.
I’m certain it makes me more attractive to #1Hubby after a few.
It certainly makes him more agreeable to my various purchases and travel plans!
It also saves my bacon when I am a less than stellar wife….
Example 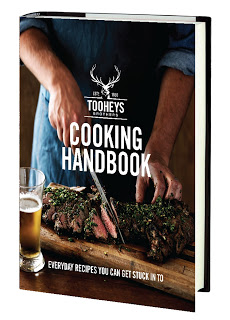 This arrived on my doorstep early last week.
#1Hubby does enjoy seeing the benefits of blogging, and so he eagerly stood over my shoulder while I opened a package involving a beer company.
Then let out a few yelps of excitement when he discovered ACTUAL BEER inside.
It was like the clouds had parted and the sun was shining from within the box while angels sang.
Then he read over my shoulder as the words FATHERS DAY were prominently and clearly mentioned more than once on the included Media Release.
Say what now?
Our mouths dropped open in sync.
I could see the cogs ticking as he came to realise what had just dawned on me…
I had completely forgotten Fathers Day.
I know, I know – how could I?  What with all the advertising telling me what a sexy, early 30’s dude, with a 3 day growth and smouldering but clear and wrinkle/bag free eyes (who has clearly never had children because he does not show the obvious signs of parental wear and tear)….would want for FATHERS DAY.
My brain was going oh crap oh crap oh crap oh crap DENY.
And so I’ve spent the past few days rushing around trying to think of SOMETHING to gift #1Hubby for Fathers Day on behalf of The Feral Threesome.
I’VE GOT NOTHING.
Short of gifting him a kidney in the event that he may need it one day.
And I’m not totally sold on the idea of gifting a vital organ to him.  He is older.  He’s had more time with his bits and pieces.  Why should the young (that’s me) have to sacrifice?
Anyway, I gave in.
I went to #1Hubby on Saturday to admit defeat and ask what he would like, because clearly I’d run out of time to find the supposedly well planned, carefully thought out, and definitely not forgotten and panic purchased gift.  You know, for Fathers Day that was “yesterday”.
GET THIS….

He thought the Tooheys Cooking Handbook that came with the beer was his gift.
And he was happy with that.
And he plans to use it.
AS IN COOK.
So now it’s my turn for the clouds to part.  There is a definite glow above his head (I’m not going to say a halo, because he hasn’t yet made good on his plans to cook).  And I’m pretty sure there were angels singing sweetly in the background.
Oh, and Fathers Day is not until THIS WEEK.

(You’re welcome for the heads up, anybody else who has failed at Fathers Day as spectacularly as I, and also thought it was a week earlier than it is).
I am like the hat  trick of awesome wife and mother and all of that stuff.
If you are short of a gift idea – why not get them a gift that keeps on giving….to you.  Like the Tooheys Cooking Handbook.
It is clearly associated with beer, so they’ll love it.
Meanwhile, you can consider it payback for the washing machine / broom / towel set / slow cooker that the man in your life has gifted you in the past.
A two-fer!
Win win!