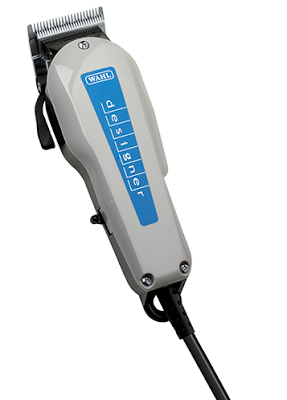 Meet my deputy of discipline.
It used to be the Zhu Zhu Pets, but my kids have out-grown that irrational fear, and the pets are no longer capable of rounding up the kids like a herd of petrified cattle.
My latest deputy only works on Mstr6, but that’s okay, because the girls understand threats and bargaining better than he does.
For Mstr6, the mere mention of getting the clippers out to do his hair has him in full blown girly-man tantrum mode.
Every time I do his hair we experience said girly-man tantrum.
But only pre-clippering.
During and after having his hair done, he quite matter of factly advises that it doesn’t hurt a bit, and he’s not scared of it at all.
He even promises not to lose his shit 6 – 8 weeks later when he’ll need his next haircut.
But he’s a liar or has a short memory or both, because we end up going through the same drama every time.
Right now, we are in a stalemate.
It’s like a Mexican standoff –
I am disgusted by his completely dishevelled look, all long bits of hair sticking up everywhere (I dumped a good handful of hair gel on one patch and it still stuck straight up in the air)
…but I do have the greatest behavioural threat ever at my disposal, every time he refuses to do as he’s told –
Me:    Eat your veg
Him:  Nooooooooooooooooo
Me:   If you don’t eat your veg you’ll go to bed early
Him:  No I won’t
Me:  Yes you will
Him:  Fine, I’ll talk to Goggerson (stuffed toy of choice)
Me:   Fine, I’ll get the clippers out and do your hair in the time you should have been eating your veg
Him:  NOOOOOOOOOOOOOO I’LL EAT IT I’LL EAT IT!
Me:   Homework time
Him:  I don’t want to
Me:   Neither do I, but, let’s do it
Him:  No, I don’t want to
Me:   Too bad, we’re doing it
Him:  No
Me:   It’s go time….
Him:  I’m not doing my homework
Me:   No, not that.  I’m getting the clippers to do your hair instead, since we’re not doing homework
Him:  Girly shriek, and runs to get homework
Me:   Bath time
Him:  No I had one yesterday
Me:   Yes, you have one every day
Him:  No I don’t
Me:   Yes you do
Him:  No I don’t
Me:   Yes. You. Do.
Him:  No. I. Don’t.
Me:   Shed words, some muttered, some slightly more audible
Him:  I did not have one Saturday
Me:   Yes you did
Him:  No I didn’t
Me:   More shed words, none muttered, all audible
Him:  Ahahahahaha
Me:   That’s it…
Him:  NO NO NO NO NOT THE CLIPPERS!
See, he’s catching on….I don’t even need to verbalise the threat now!
Works like a charm, every time.
I just have to live with all that hair until I find a substitute threat that he responds to just as passionately.
Am going to hit YouTube for tutorials on how to braid the rats tail that’s appeared at the back into a side pony.